(From the South Bend Tribune. Click here for the original article.) 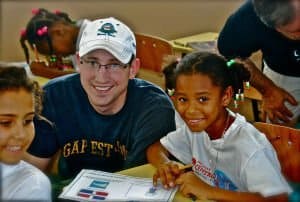 WARSAW – A week’s vacation to the Dominican Republic in 2006 to honor Wildman Business Group founder Rex Wildman and his wife, Lorabel, for their 60th wedding anniversary has instead turned into a vocation.

The effort by their son, former Triton High School teacher and coach Rod Wildman, to simply help the poor people of Bavaro in the Dominican Republic while he was on the trip spawned a ministry — 2nd Mile Missions — that is still going strong seven years later.

In that first visit, Rod took toys, clothes and medicine to poor families there.

They met with Pastor Pasqual Borrell, who invited them to share the gifts with children of his Christian church, City of Hope.

Borrell then told them of the vision he said he had from God to build a school for the youngsters, both native Dominicans and Haitians.

Today, 800 students attend a school that the Wildman Business Group and its employees and families have helped build.

Initially, Wildman Business Group covered the cost of the teachers as well as the students’ daily breakfasts. It then added operational costs and portions of each construction project.

Now, there’s also a trade school, a preschool and an orphanage. Josh Wildman, CEO of Wildman Business Group, said the business is still supporting the effort.

But his company, which provides an extra week of paid vacation for employees who make a trip there, finds the payback to be great.

“I think it imparts in our culture that people are working for a purpose,” Wildman said, noting that 70 workers and/or family members of the 200 they employ have made the trek. “It’s more than just a paycheck.

And that pays off in the company’s businesses, which include uniforms and linens, corporate apparel and first aid and safety products.

The first years, they helped build the school that opened in 2007 with 75 students and two teachers. Now, mostly they mentor and visit the children in their village.

“That’s what these kids want,” said David Bazzoni, a company executive who made the trip in 2011.

“They just kind of want your time and caring and love. They just want you to talk to (the students).”

Many of the kids were living in harsh poverty when it all started.

“Their mouths were dry; they had big bellies; they were hungry,” Borrell said in a phone interview. They also did not know how to read or write.

Now, with the school, where they also get fed, “the kids they feel so lucky,” Borrell said.

Bazzoni was very pleased with the difference he saw the company was making when he made the trip.

Without the school, many of the kids might find their way to selling drugs or even prostitution, Josh Wildman said. But the school helps break the cycle.

“If you’re educated, you can better yourself,” Bazzoni said. “If you are not (educated), you are in deep, deep trouble over there. But if they go through the school and learn a trade, they can live a better life.”

Borrell said at first he was very surprised to see Americans help his parishioners in such a way. “I never saw American people or a company that would just give so much,” he said. “It’s more than just money. They come here. They share with us. They be with those kids. They talk to them.

“Most of those kids they have so low self-esteem and when they see (the visitors), you have to see it, they jump on them. They’re so happy. It’s so nice when they know that somebody cares about them.”

It was Josh Wildman who realized how valuable it might be to employees to make the trip there.

“I know what it has done for me personally,” he said. “It’s given me a perspective on what we have here in America.”

And so the company started taking employees. The next trip is this May.

It’s worth noting Wildman Business Group also is involved in about 14 other local and global charities.

But the company is clearly having quite an impact in the Dominican Republic.

“We are breaking that cycle.”

It also may be starting another cycle of its own. Other companies are asking Wildman Business Group about its project.

“And they have started similar programs,” Josh Wildman said, “and seen good things as well.”

Governor Mike Pence and Lt. Governor Sue Ellspermann addressed the honorees at the Indiana Roof Ballroom prior to the awards ceremony held recently.

Companies to Watch firms must employ between six and 150 full-time equivalent employees, have between $750,000 and $100 million in annual revenue, and demonstrate the intent and capacity to grow exponentially.

Sportula Products is the flagship brand-offering for Warsaw-based business, IDNA Brands. IDNA Brands (signifying that great ‘ideas are in the company’s DNA) is a subsidiary of Wildman Business Group, headquartered at 800 S. Buffalo St., Warsaw.

Within Sportula Products, the company markets four unique grilling and tailgate-inspired items, including, “The Sportula” – a highly unique stainless steel ‘hamburger flipper’ with your favorite team’s logo cut out of the stainless steel and a bottle opener at the other end, a set of four coasters, known affectionately as “Boasters,” a heavy-duty 3-piece BBQ set featuring The Sportula, and a matching fork and tong with your team’s name heat-stamped onto each of the hard-maple handles, and an all new product known as “Grill-A-Tongs.”